Prime Minister Imran Khan’s visit to Afghanistan on 19 November was the first high-profile visit by a senior-level Pakistani dignitary to the country since peace talks began and came days after the Pentagon announced that it will be reducing its troops from 4,500 to 2,500 by mid-January 2021. Besides, the visit came at a time while the Taliban attacks on government leaders, security forces, and civilians were on the rise despite peace negotiations between the Taliban and the Afghan government in Qatar. 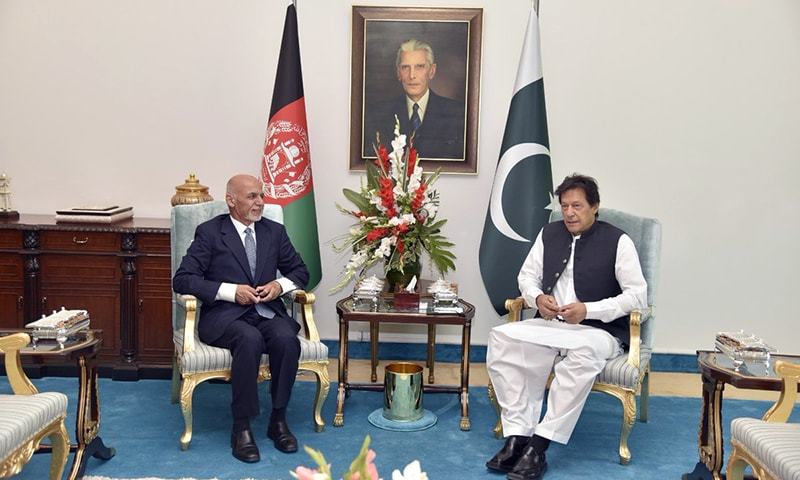 Prime Minister Khan’s strong entourage was greeted with a warm welcome by the Afghan government as the talks at the presidential palace in Kabul focused on the ongoing peace talks with the Taliban and strengthening relations between the two neighbours. Although the basic thrust of the visit was to build trust between the two countries, which have a difficult and acrimonious relationship, Prime Minister Khan assured his full support to reducing violence and help the Afghan-Taliban peace talks towards a ceasefire.
The Pakistani Prime Minister acknowledged Pakistan’s role in getting the Taliban to the negotiating table and assured that Pakistan will do everything possible to help reduce violence in the war-torn country. President Ghani who described the visit as ‘historic’, accepted a future invitation to visit Islamabad seeking to overcome the distrust that has haunted the relationship between the two neighbours. He stated that he was aiming for a comprehensive political settlement within the framework of Afghan values and their Constitution for long-lasting peace in the region. At the conclusion of the visit, a document was issued focusing on the ‘shared vision between Pakistan and Afghanistan for the peace and stability in both countries and the wider region’. If implemented, this will have far-reaching consequences for bilateral relations. Some of the key elements of the shared vision document are: (a) both countries should enjoy special relationship based on predictability, transparency, respect for one another’s sovereignty, and expanding of mutual interest; (b) multi-alignment of Afghanistan with other countries pursuing friendly relationship can give the opportunity to both countries to minimize any threat; (c) both countries should work together to identify and tackle the enemies of peace and their territory should not be used for malicious purposes; and (d) the joint venture should emphasise trade, free movement of people, goods and services, opening of trade and customs posts, and transport and energy infrastructure development.
Moreover, the safe and dignified return of the Afghan refugees and the need by both countries to address the challenges associated with the humanitarian and socio-economic problems of displaced population was one of the key issues discussed. Representatives of both countries agreed upon the importance of close coordination, structured dialogues, willingness to take difficult and courageous steps, and focus on the region’s economic development and connectivity. Prime Minister Khan’s stance that peace in Afghanistan could only be achieved through political means and there was no military solution to conflict in the war-torn country was reiterated with his statement that this is “another step towards conveying Pakistan’s commitment to peace in Afghanistan.”
Both sides agreed to keep this shared vision, as well as its previous and present commitments under regular review to ensure measurable, clear, and irreversible steps towards furthering closer and more productive relations between their two countries. Furthermore, without naming India, the document points out that Afghan-India relations should not be seen as a threat by Pakistan and that the Islamic Republic of Afghanistan’s posture of ‘multi-alignment’ with other countries, pursuing a number of friendly relationships presents a real opportunity for the two countries to exploit and conversely present no threat. One significant development is the fact that by 15 December both countries will ‘re-energize joint intelligence services-led work on analysing, mapping, and cooperating against enemies of peace and those undermining the peace process’.
The visit is arguably an important step in the future of Pak-Afghan relations. Yet success depends on how much the two countries are able to restore confidence in each other and dispel the feeling of mistrust, which has haunted relations between the two neighbours in the past. Ghani’s forthcoming visit to Pakistan in the first quarter of next year may well depend on the events of the coming months. Given its rancorous relationship with India, Pakistan wants to strengthen its ties with Afghanistan and desires peace within it to avoid a two-front war dilemma and aims at reducing the Indian influence in Afghanistan. On the other hand, many Afghans see Pakistan as being sympathetic to and having close ties with the Taliban, posing challenges for any promise of peace and cooperation in future.
Interestingly, the talks completely lacked a discussion on Washington’s announcement regarding troop reduction. The withdrawal is seen by many as leading to increase in violence, regional chaos, and strengthening of local Islamic groups. Moreover, this meeting could have been more successful if important Afghan personalities, such as Abdullah Abdullah, were present and Prime Minister Khan’s meeting was not only restricted to President Ghani. Perhaps, this is indicative of the cautious approach taken by the Government of Afghanistan towards its relations with Pakistan. The course of action taken by the two countries in the coming months will determine the future of their bilateral relations.