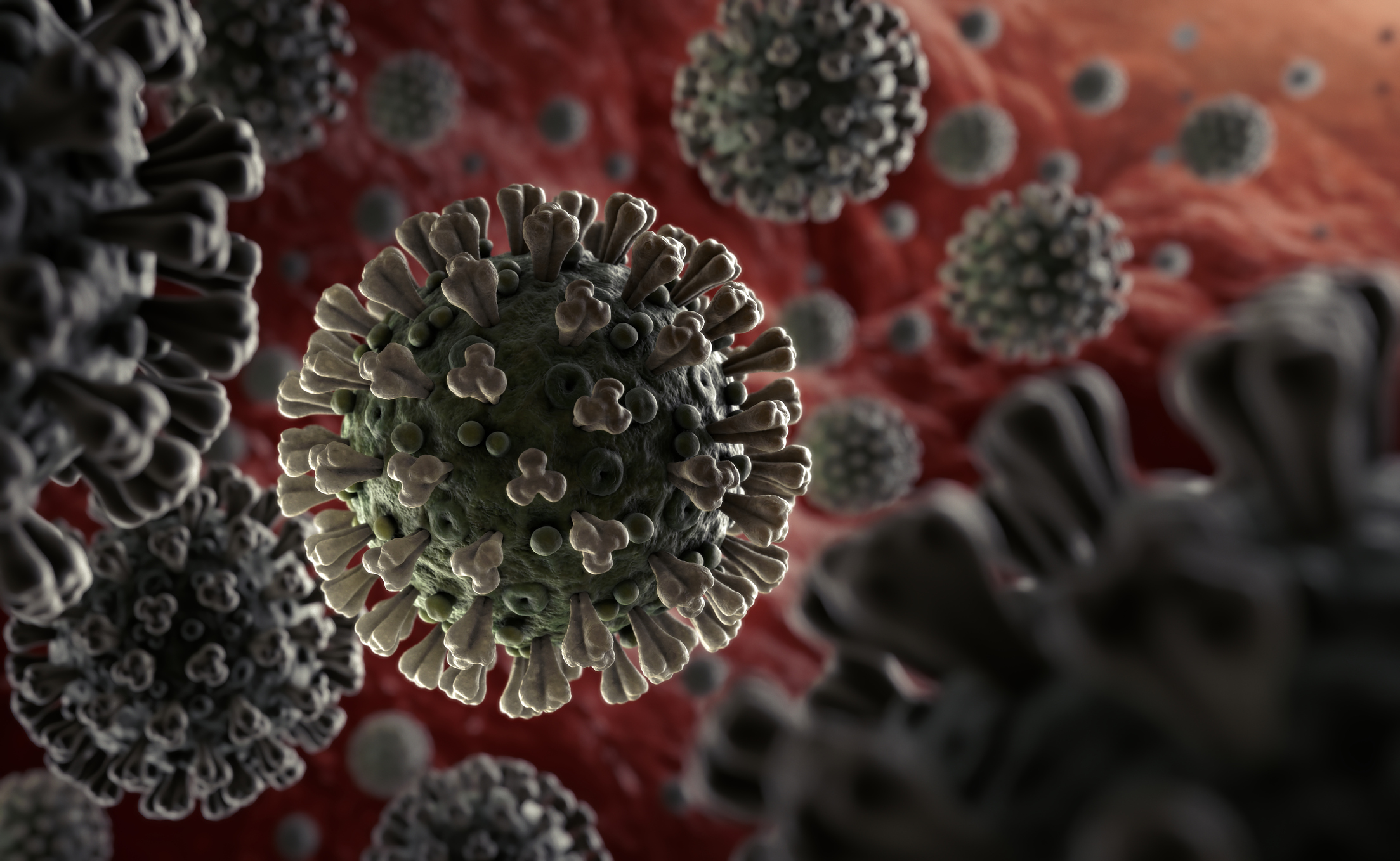 Zunaira Inam Khan
The novel coronavirus is a pandemic that is affecting every country and region around the globe, including South Asia. Unfortunately, South Asia has all the makings of a public health disaster. It is densely populated, has poor health infrastructure and is geographically close to some of the countries that were hardest hit by the coronavirus..

POTENTIAL FOR REGIONAL COOPERATION IN CYBERSPACE 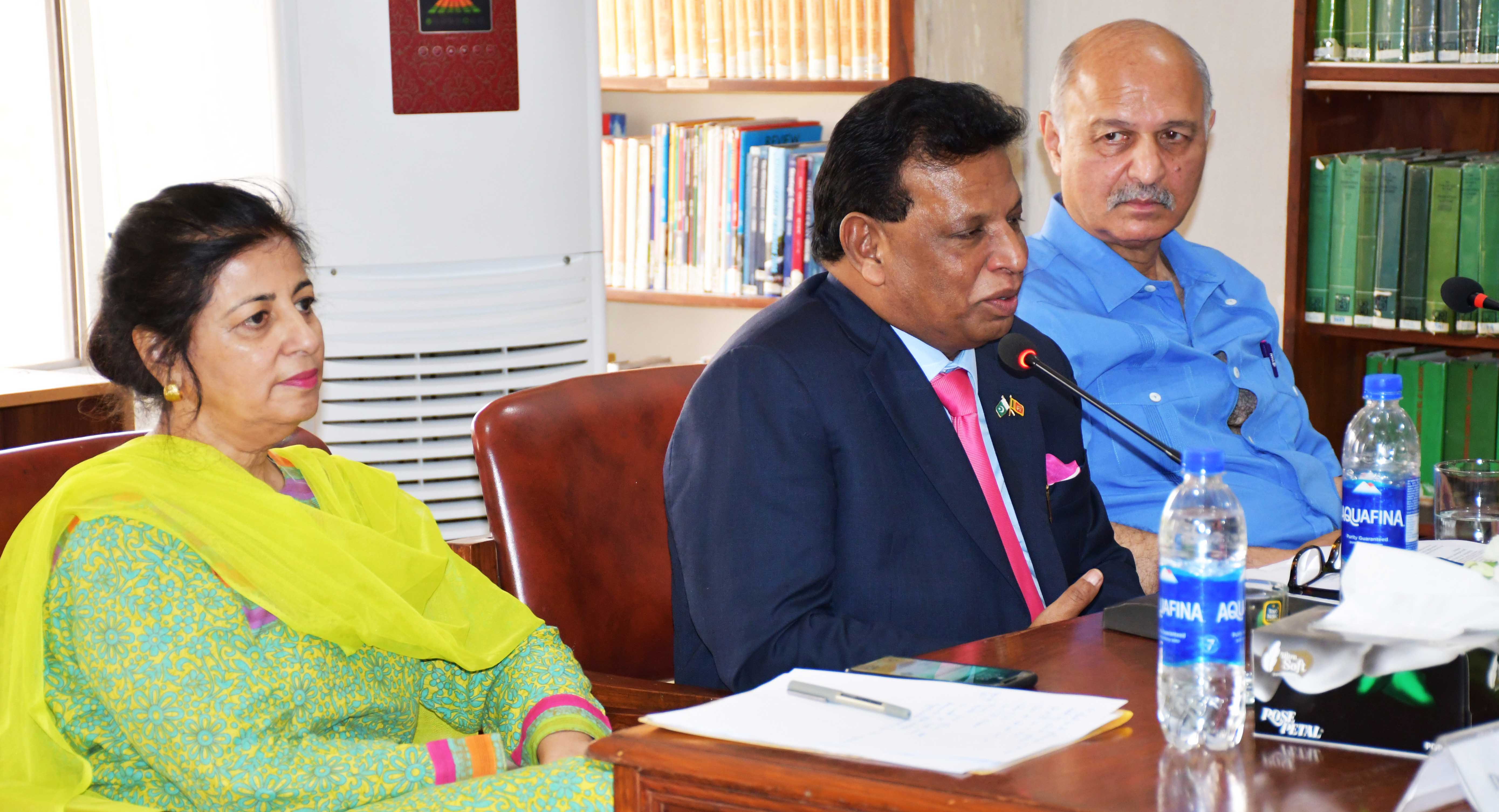 More
Previous Next
About irs

The Institute of Regional Studies (IRS) is an independent, non-profit research centre devoted to the study of the region around Pakistan: South Asia, Southwest Asia (Iran, Afghanistan and the Gulf), China, Central Asia as well as the Indian Ocean region. It also studies and analyses policies of major power centers towards South Asia. The Institute was set up in March 1982. It is considered one of Pakistan's leading think tanks. The Institute covers a wide spectrum of research in foreign and internal affairs, economy and industry, science and technology. The Institute has covered research on the region's - foreign and internal affairs, economy and industry, science and technology, socio-cultural and security related issues. It thus provides in-depth understanding and analyses of regional and global issues. IRS is in touch with similar research institutes the world over. 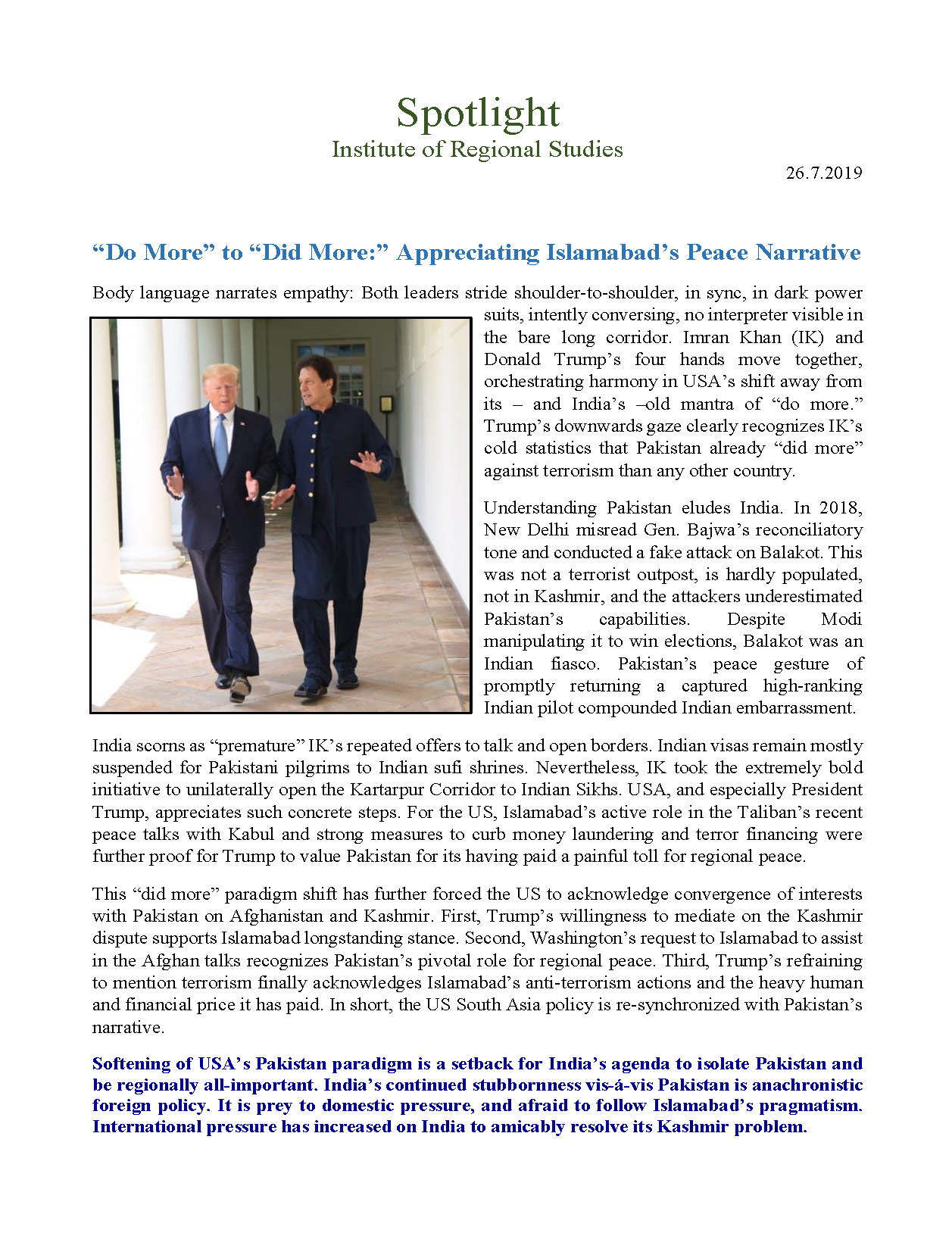 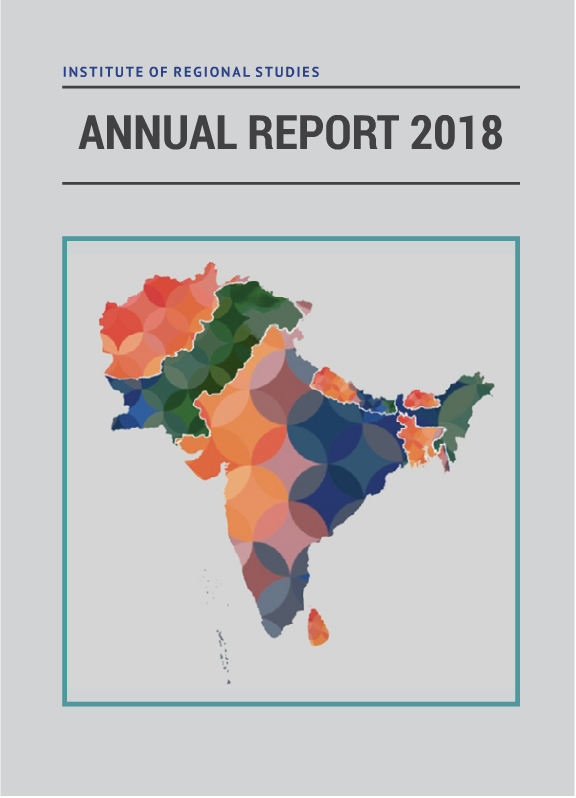 His Majesty, The King met DG of India’s Military Operations ..

US-China decoupling to be accelerated ..

After nearly two decades since the US invasion of Afghanistan, the country continues to wrestle with a plethora of problems. Political instability, deteriorating security, poor governance, unsuccessful peace talks with the Taliban, and the presence of 21 terrorist groups including the ..

During much of the Cold War, New Delhi’s strategic perceptions remained overwhelmingly land-centric. Maritime thinking and significance of naval power took a secondary spot in the Indian strategic and security perception ..

As part of the enormous new Silk Route project or the One Belt One Road initiative, the governments of Pakistan and China developed a proposal in the mid-2000s to create an economic corridor from Kashgar, Xinjiang, in China to Gwadar, Balochistan, in Pakistan with an aim to promote national, bilateral, and international economic integration ..

South Asian security dynamics are characterised by divergent security goals of India and Pakistan. Pakistan developed nuclear weapons as a power balancer against India, which was at an advantageous position over Pakistan in terms of conventional weaponry and forces. As there exists a balance of power, thanks to the possession .. 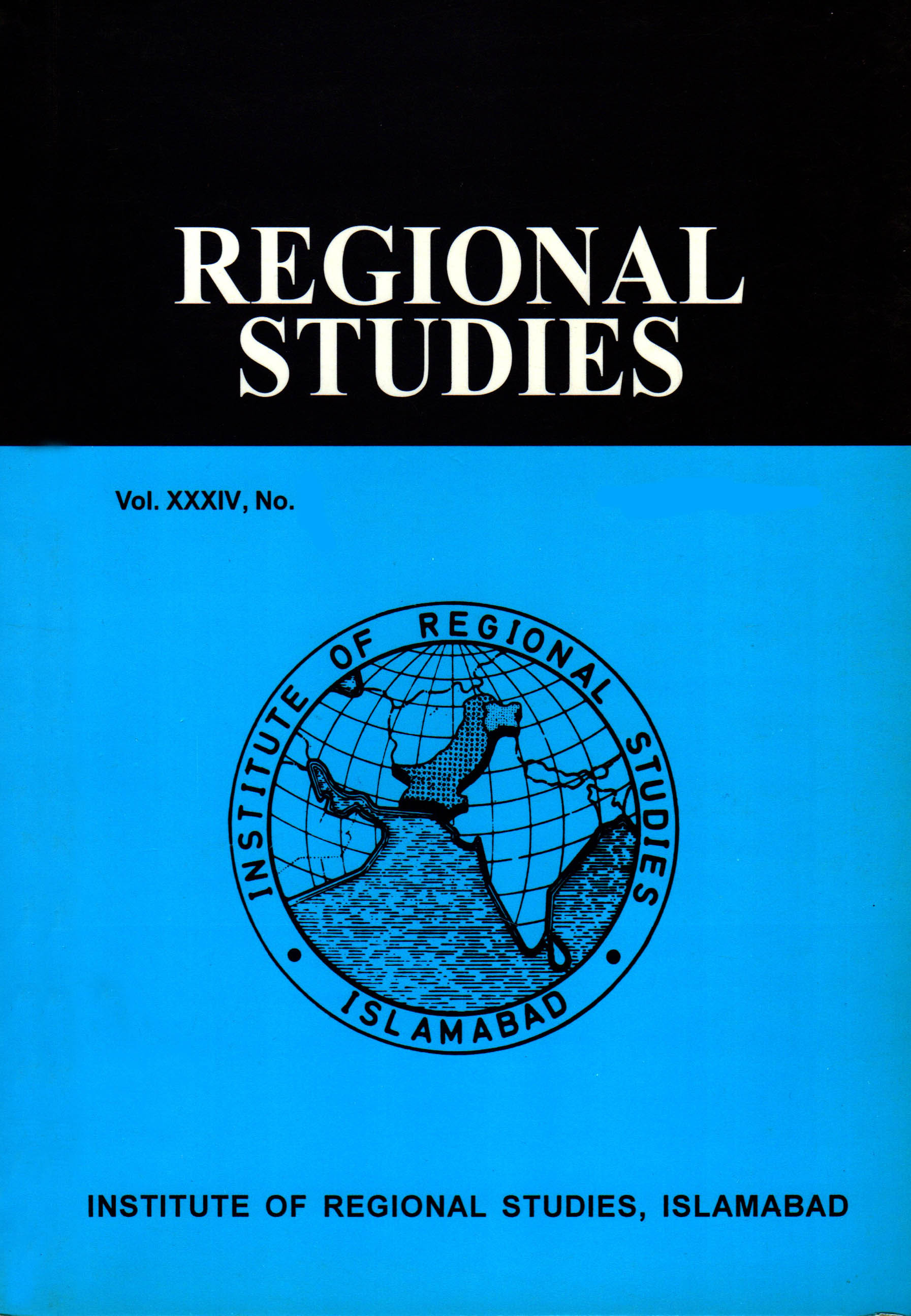 Scholars who have an interest in the regional affairs are invited to contribute to the IRS journal.
Submission Guidelines

The novel coronavirus is a pandemic that is affecting every country and region around the globe, including South Asia. Unfortunately, South Asia has all the makings of a public health disaster. It is densely populated, has poor health infrastructure and is geographically close to some of the countries that were hardest hit by the coronavirus.

Pakistan shares borders with China as well as Iran. The former is where the virus originated and the latter is one of the most affected countries. China has a huge presence in Pakistan, especially because of the China-Pakistan Economic Corridor (CPEC). The number of cases in this region is on the rise, despite measures being taken by the countries to halt the spread of the virus. So far, Pakistan and India have a relatively small number of cases but the numbers are rising and may be higher already considering the lack of kits available for widespread testing.

This is a region that has some of the highest urban population density in the world. Five of the top ten most densely populated cities are located in South Asia. No one has yet developed a vaccine for COVID-19. Thus, having adequate supplies and enforcing and adopting social distancing are the only means to control the spread. The consequences of a Covid-19 pandemic in South Asia would be catastrophic. More than a fifth of the world’s population resides here and contributes to more than 15% global economic production ..

Kodikara Fellowships - 2020 The Regional Centre for Strategic Studies (RCSS) invites research grant applications for its annual Kodikara Fellowship Programme. The grants are offered to young South Asians, aged between 25-35 years, to conduct policy relevant research on strategic and international issues of contemporary South Asian interest. An award of USD 2000 will be made available for each Research Fellow to conduct research. The fellowship is tenable for six months, commencing in 2020.